The digital incarnation of the sacred site. The original beer wall was located on Broomwood Road in South West London, and quickly built a reputation in the local area as an important monument in honour of world lagers. Dismantled in 2012, it has now been reborn online.

Under the stewardship of the four founding fathers, the Broomwood residents and honorary Beer Wall contributors used their King's thirst, and penchant for organising bottled beers by continent, to assemble a comprehensive collection of empties in recognition of their consumption.

Alas, with space limited, relocation impractical, and on the insistence of Wandsworth council, this historic monument was decommissioned in 2012. Photos from the beer wall's prime are below; may they offer inspiration and guidance in our onward quest, here, in the digital age. 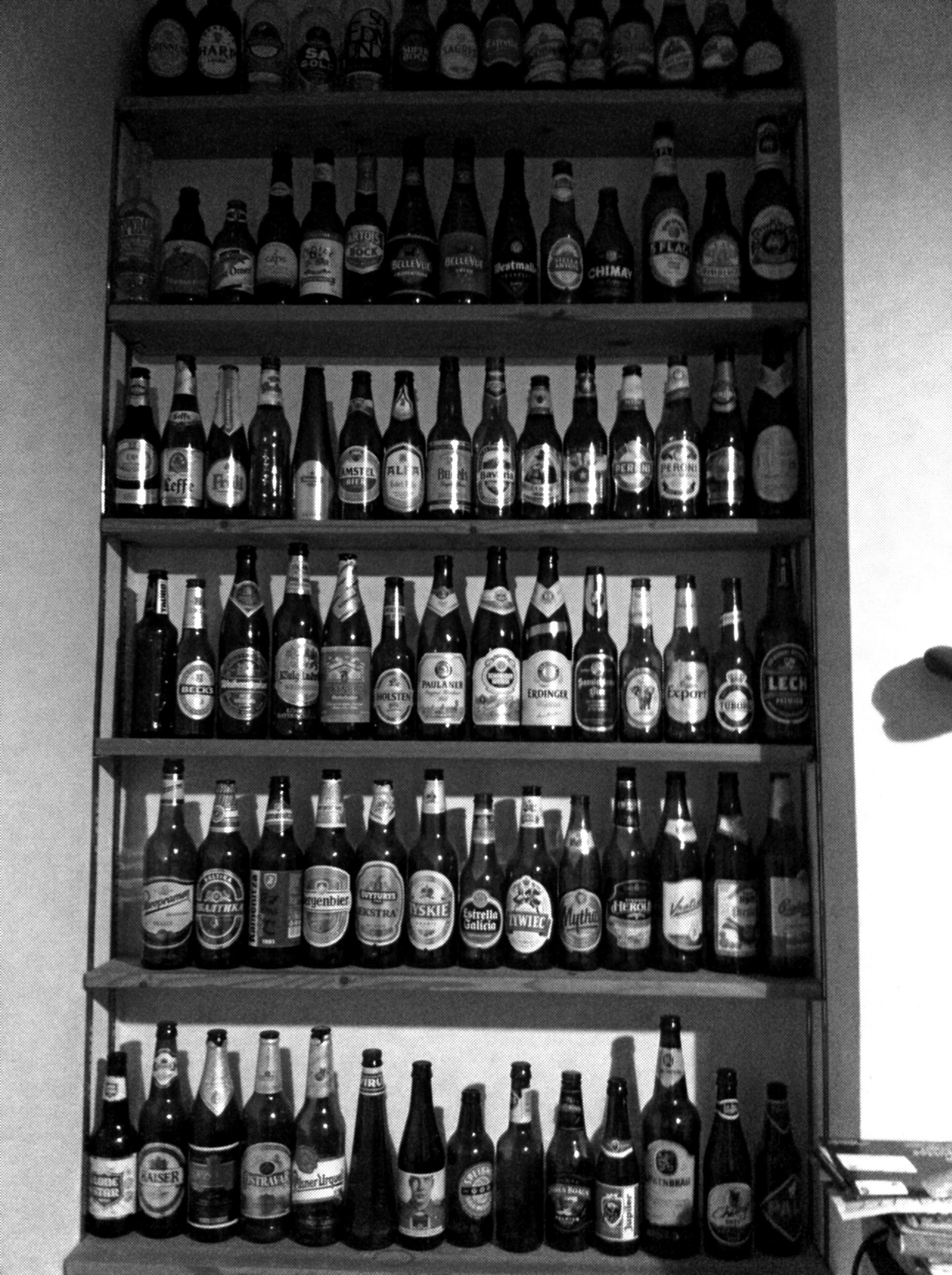 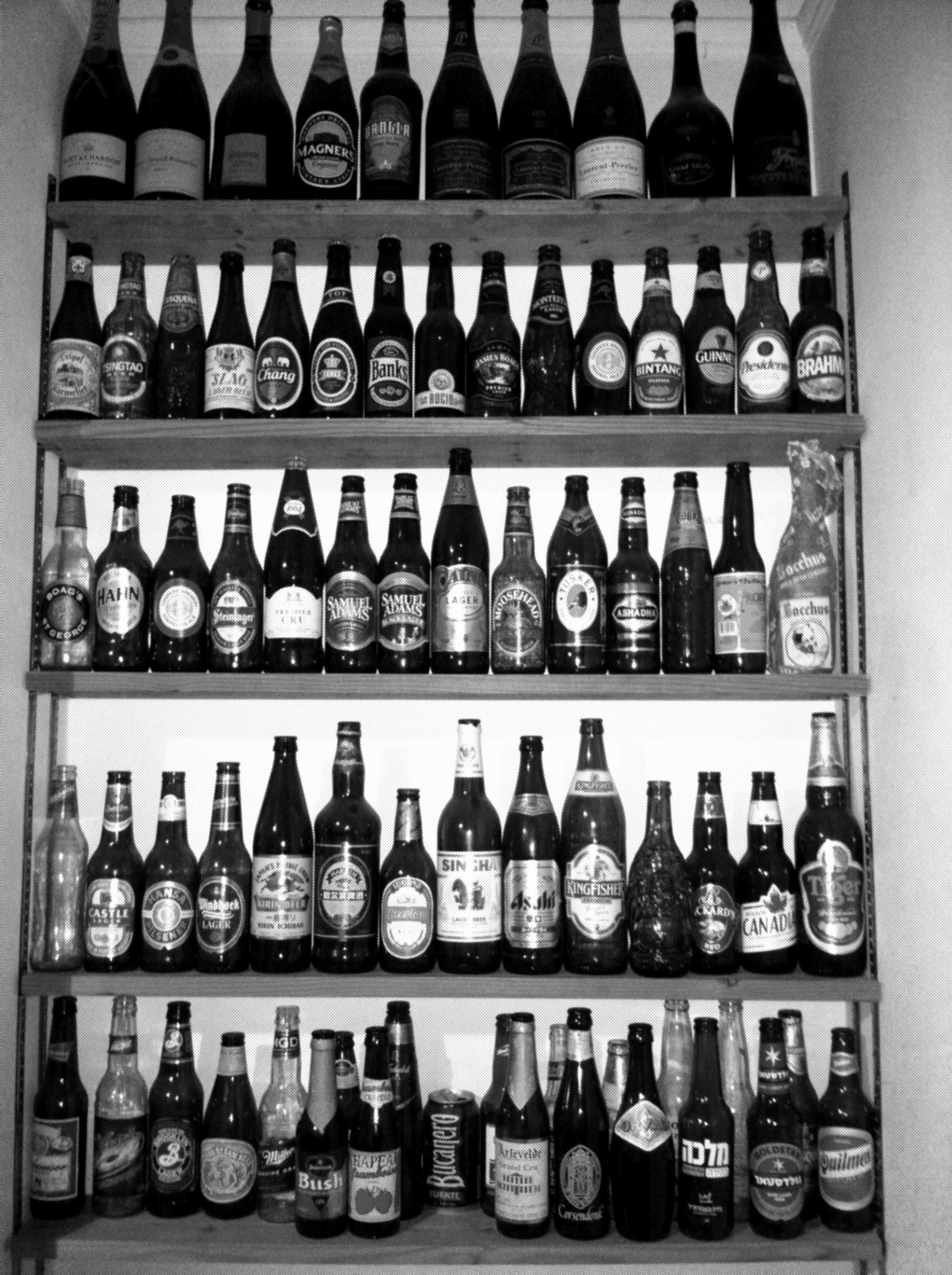 The premise is simple. Tip a hitherto unlogged bottled beer, photograph it, and upload it to the digital beer wall, providing the following information:

With beer, basic economic assumptions hold: more is better. The objective, as a group, and on an individual basis, is to consume as many unique beers, from as many countries as possible.

Remember, the beer's name is used to identify duplicates at the point of upload, so try to be reasonable and get it right. It may also be used by comrades (and competitors) to identify those beers still in need of sourcing and draining so, again, try to get it right so that we can live in harmony.

The group target is to consume at least one qualifying beverage from every country on our planet. Of course, some may be more challenging than others. Those requiring a working holiday with a home brew kit may have to be done last.

In the meantime (no brewery based pun intended), the proportion of countries completed is presented via two metrics: total countries, and beer drinking regions (BDRs). BDRs represent the realistic maximum country count achievable without moonshine in a speakeasy. Where countries are considered to be non-BDRs, their excuses are presented on the map page.

Those thirsty enough to successfully source beers may notice that with each upload there is an opportunity to mark the beer as a 'Signature'. This is not a terms and conditions tick box; it means something, treat it with considered respect.

Each country can have one 'signature' beer. This honour should be assigned to the beer believed to be the most popular, or most representative, or most readily associated beer in, of, or with the country in question.

The rules are quite simple:

The scope is limited to lager due to the extensive availability of unique ales; including them would not only reduce the level of challenge, but would increase the level of drunkenness. The latter being particularly problematic given that individual competitiveness has been known to encourage a sneaky midweek, pre 11am, snifter or three.

Given the lack of clarity around the definition of lager, we have defined it to include:

Disputes happen from time to time and this is where the Beer Wall Council comes in. Or "BWC", as the founding fathers prefer to be called.

While the rules are clear and designed to make beer drinking as pleasurable as possible; there are inevitably some grey areas and times when conventional wisdom ought to be challenged. In such scenarios, the overarching principle is that beers may be consumed and uploaded at a participant's own risk. Note that 'own risk' is in reference to potential non-acceptance, as well as potential disciplinary action in extreme cases - covered in more detail below.

Where an addition finds itself in an aforementioned grey area, the BWC will make a judgment and confirm if the beer is acceptable or unacceptable, accompanied with clear rationale. Where desired, participants may be asked to provide evidence to help guide this initial assessment.

In the case of the beer being deemed unacceptable the contributor may abide by the decision or raise an appeal. Through the appeal process, the contributor will have 24 hours to present their case to the BWC for further consideration. Upon expiry of this period the BWC will consider the case and reach a final non-appealable decision. If the beer is ultimately deemed to be unacceptable it will be removed from the wall.

You know the rules. If you don't, visit the 'Rules' page, and have a read. We are a tolerant and patient community of beer over-enthusiasts, but ill discipline, a failure to follow the rules, and repeat offences could lead to disciplinary action. Potential offences are wide ranging, and limited only by one's drunken or mischievous imagination, but examples of behaviour which will not be looked on favourably include:

A three strike system will be enforced, with strikes distributed at the discretion of the BWC - and on recommendation of beer wall contributors, as appropriate. Following three strikes, the ability to upload will be suspended until a punishment, allocated by the BWC, is completed.

Punishments may include, but are not limited to: drinking a bottle of Carling. Yes, the signature beer of the UK, no less.